Spider-Man - Turn off the Critics

UPDATE: 6/14/2011 - AFTER MONTHS OF CHANGES AND ADJUSTMENTS, SPIDER-MAN IS FINALLY OPENING ON BROADWAY TONIGHT. I WILL SEE THE SHOW AGAIN ON JULY 2 AND MAKE A NEW REVIEW... 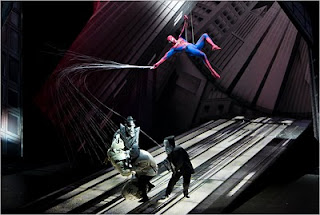 That’s what the critics are saying about “Spider-Man: Turn Off the Dark”, the controversial most expansive musical ever produced.
The Smart Traveler bought discounted tickets on http://www.broadwaybox.com/ (US$97 – 40% off regular price),  and saw the show on Saturday, February 12, at the 2PM matinée, and that's what he has to say: 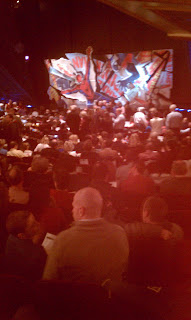 Based on all the reviews, the mishaps and delays, I knew I was going to see the worse and more expansive musical ever made and that’s why I went to see it. And I’m glad I did and I’m surprised I was utterly wrong. This is the most original, entertaining and daring musical to open on Broadway for the last 30 years.
It’s not easy to bring Spider Man to the stage, but the great director Julie Taymor (Lion King) transferred the comics experience to the stage with genial creativity, amazing sets and breathtaking special effects.

Reeve Carney plays Peter Parker with perfection and when he sings his solos ballads (Rise Above, The Boy Falls From the Sky) you understand that he is a star in the making.

Jennifer Damiano got a Tony nomination when she played the daughter on Next to Normal and now she plays Mary Jane with the same dramatic depth and I bet she will get her second nomination for this role. She sings the best song on Spider Man – If the World Should End – proving her undeniable talent.
There is the legend of Arachne (kind of a Spider Woman) that brings a new dimension to the whole plot, and T.V. Carpio who plays the part is another great addition to the cast and her songs (Behold and Wonder and Turn Off the Dark) are touching and beautiful. 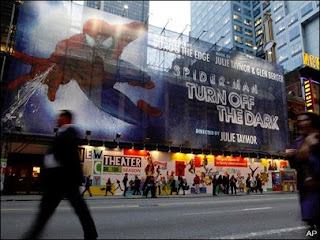 So apparently Bono and The Edge did a great job after all, with innovative lyrics and wonderful music.
This show will be a great hit. Once again, the critics will just help to promote this amazing show with their bitter reviews.
When I was leaving the theater, I talked to several people and everybody agree that this is a great show that doesn't deserve the bad press that is getting.
I’m sure that word of mouth will take care of it and the next Wicked will shine on Broadway soon!
Posted by The Smart Traveler at 9:01 PM