We drove from Agra to Jaipur on a chaotic road where we saw people dying on a motorcycle accident, a dead buffalo hit by a car and hundreds of cows laying down on the road. No police in sight during the four hours trip, just roadside vendors, trash and dust on this lawless countryside. 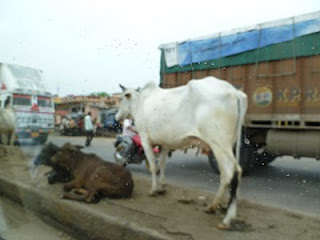 Jaipur is a little better than Agra, but you will always be remembered that you are still in India. It's the first planned city in India and has a population of 3.2 million. We stayed at the Trident Hotel, ex-Hilton bought recently by the Oberoi chain. Nice but way bellow the Amarvillas in Agra. 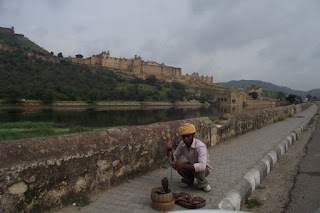 In Jaipur we visited the Amber Fort. Amber Fort is located in Amber (Jaipur), which used to be the capital of the Kachhwaha clan, till Jaipur was made the official capital in 1727. The Amber Fort looks stunning, all-built in white marble and red sandstone. To add to its charm, Maotha Lake makes its foreground. The crystal mirror image of the Fort, on the still waters of the lake, seems to be a beautiful illusion. Amber Fort is usually pronounced as Amer Fort. In 1592, construction of the Fort was started by Raja Man Singh I. However, the Amber Fort took its present form during the reign of Raja Jai Singh I.  It was the most beautiful monument we visited during this trip. 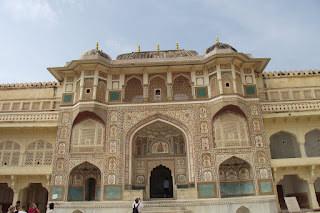 The outer appearance of the Fort, being rough and craggy is totally different from its core. The interior of the Fort provides a soothing and warm ambience, which is least expected from its outer appearance. The marvelous decoration of the Amer Fort is influenced by both, the Hindu and Muslim manner of ornamentation. Exquisite paintings of hunting scenes on the walls depict the temperament of the Rajputs, who were adventurous, revolutionary and self-indulgent. 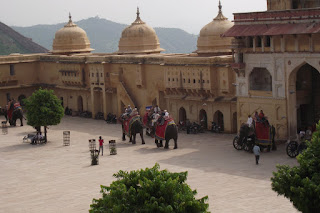 The intricate carvings on the walls and ceilings simply astonish the visitors. The minute mirror work adds to the grand appearance and royalty of the halls. The Amer Fort undoubtedly captivates the tourists with its artistic quality of delicate work. The mighty walls guarantee the protection of the Fort against the invasion of the enemies. 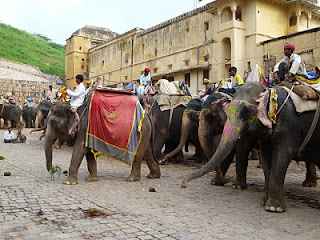 The best part of this tourist attraction situated on a crafty hill, is the royal elephant ride. The flawless beauty of the Fort can be enjoyed royally with an elephant ride. Amber/Amer Fort is the part of Jaipur and its royalty. A trip to Jaipur would be definitely incomplete, without the visit to this imperial Fort of Amber. 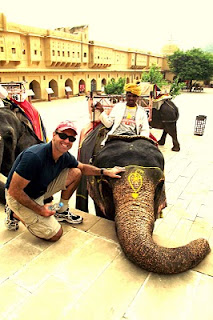 Next week, the final stop: New Delhi!
Posted by The Smart Traveler at 6:55 PM

Email ThisBlogThis!Share to TwitterShare to FacebookShare to Pinterest
Labels: India 2010